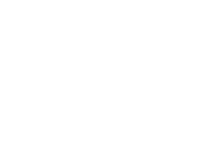 “Darkest in the Water Brightest on Stage.”

Justin Carr was an Earth Angel, Renaissance man, scholar, singer, actor, artist, and Junior Olympian. He inspired others with his selfless commitment to peace and hope, as he supported the marginalized, the vulnerable, and the unseen. He repeatedly prayed, “God help us achieve world peace,” beginning at the age of four. He wanted all citizens to love one another, and it was simple to Justin. Be kind. His infectious, unforgettable smile lit a room with sunlight. He didn’t know of a stranger; everyone was a friend, particularly his classmates who were impacted by his funny, silly, and wise presence and who still speak reverentially of Justin a decade after his untimely death. His love for his friends, affection for his large, boisterous family, and commitment to the earth is the gift Justin left the world. These same gifts are still treasured by everyone lucky enough to have known his beautiful spirit and soul. 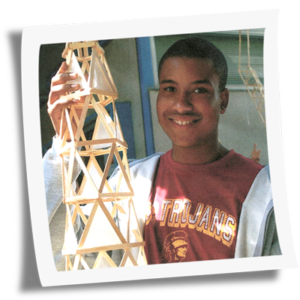 Justin was a talented visionary. He was ebullient from birth and filled with spontaneous creativity. He loved the visual and performing arts, designing buildings, creating enthusiasm, and leading and orchestrating.

He also loved to swim, starting when he was two years old. When Justin was 8, he bravely taught himself how to dive off the block at his first swim meet—only minutes before his race. The judge said, “He is not going to win! “But Justin dived right in and swam like crazy… and won first place too!! Later, he even qualified and participated in the Junior Olympics.

As a vibrant 16-year-old 11th-grade student at Harvard-Westlake School, Justin was a Student Ambassador, a member of the Swim Team, a Leader in the Black Leadership Awareness and Culture Club, a Section Leader in Chamber Singers, and a member of the Jazz Singers. He also performed in various theatrical and television productions, had his Screen Actors Guild (SAG) card, and started the first Architecture Club. In 2012 he traveled to New Orleans, Louisiana, helping to rebuild homes for Habitat for Humanity. 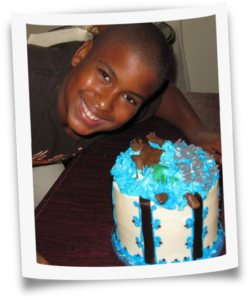 Justin’s parents, Darrell Carr, and Susan Toler Carr were the light of his life. Justin loved when Susan baked triple chocolate mint brownies for him and his friends, they laughed until they cried, knew all the words to the  ‘Wicked’ soundtrack and Smokey Robinson’s ‘My Girl,’ danced together to Beyonce until their hips hurt, and reflected on each other’s purpose in the world: each one, teach one. Darrell taught Justin to work with his hands and build something that lasts generations. He instilled in Justin racial pride and the importance of preparation. Leading by example, Darrell and Susan prioritized honesty, resiliency, and purpose. The lessons Justin learned from his parents were a source of inspiration. He couldn’t help but go out in the community and teach others. He smiled often and wanted to make sure others enjoy life too. He was kind and a steadfast supporter of the underdog, regardless of the social consequences. Justin stood up for what was right and helped his friends. He was the connector—full of compassion and empathy, understanding people, and lived by a code of values unseen in others his age. Those values would become his moral code.
In January 2013, Justin had an assignment to describe his best character traits. He was most proud to be skillful, helpful, observant, creative, and sensitive. On February 22, 2013, Justin, seemingly healthy, attended his classes and helped construct a stage for an upcoming theatre production. Before his routine swimming practice, he had just concluded a happy telephone call with his mother. After completing a few laps, Justin died instantly. An undiagnosed heart condition called idiopathic hypertrophic cardiomyopathy caused his Sudden Cardiac Arrest.

Justin’s parents have taken the soul of their son and turned it into the blocks from which stairs descend to an unlimited future based upon creativity. One child at a time can leave behind a life of isolation and aloneness and venture into the vast world of self-expression. We depend on artists to make sense of the world when the ordinary rules do not apply when we need to believe in peace and kindness and giving and love, rather than war and sorrow and randomness and fear. 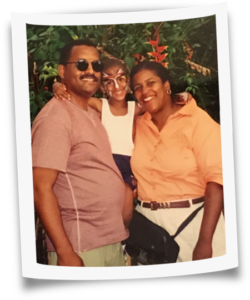 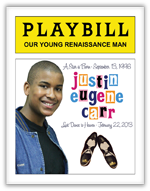 That Note to Santa 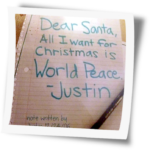 In Justin’s early years as a “believer,” every Christmas Eve, he would leave a plate of cookies, milk, and a note to Santa Claus by the fireplace. His parents found this note he wrote when he was nine, penned in his signature turquoise, which they found to be prophetic and appropriate for JCWWP. 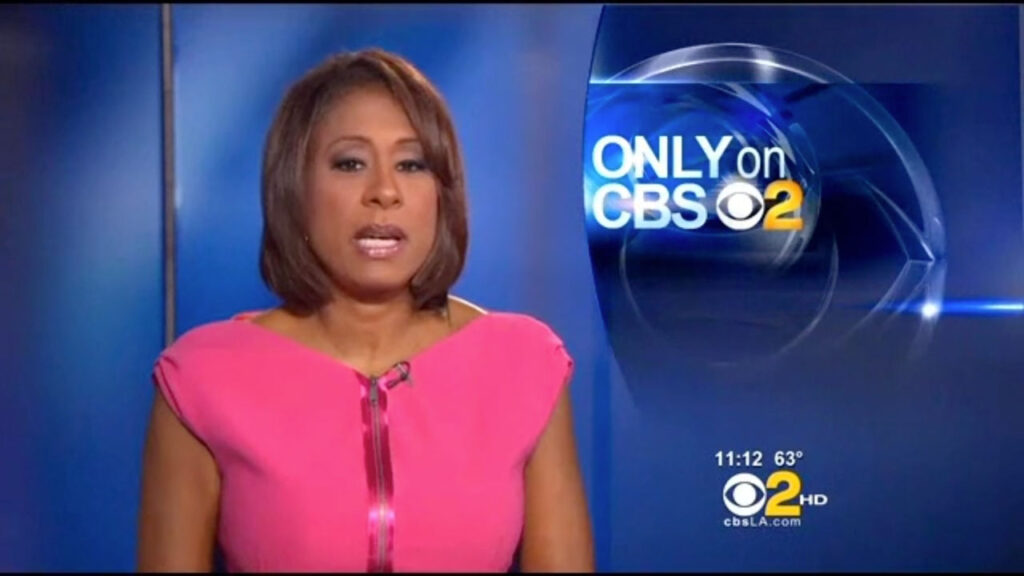 “I want to be able to give back to those less fortunate than me by creating an after school program in neighborhoods where kids are not exposed to the visual and performing arts allowing them to have another outlet to be expressive…I have lived a very fulfilling life so far, and I thank my family and friends for consistently supporting me throughout my journey.”—Justin Carr, January 8, 2013

Click on pictures to hear Justin speak about his Grandfather Burl Toler, Sr. at age 6 and age 16. 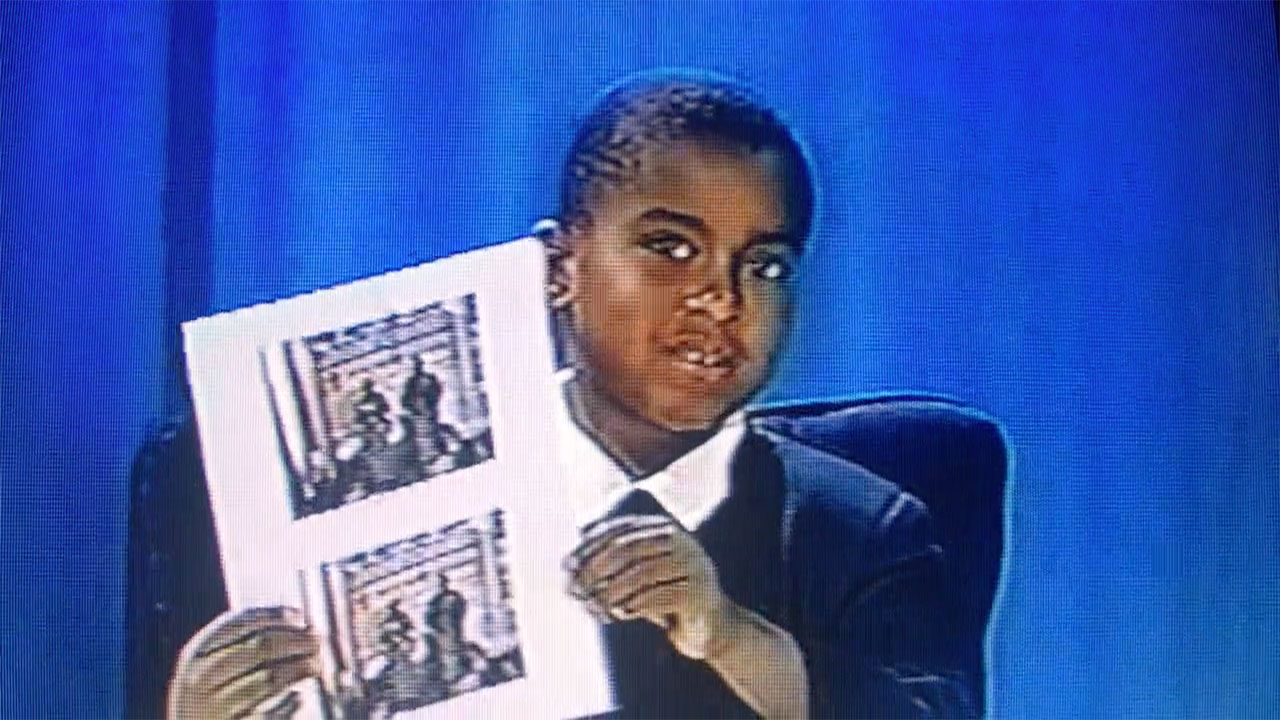 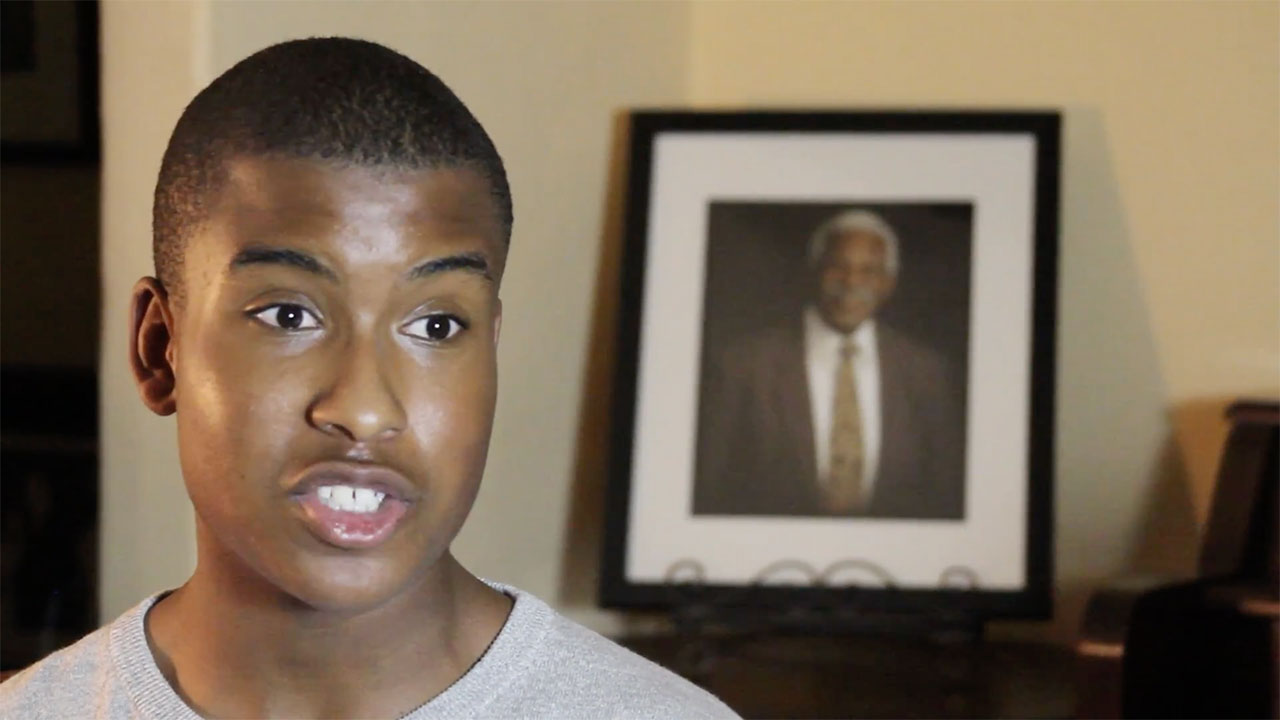 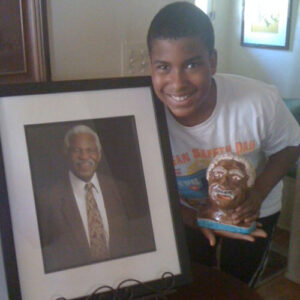 Bust sculpture Justin made in his art class of his Grandpa

The meaning behind Turquoise and Butterflies
Because Justin’s favorite swim stroke was the butterfly, and turquoise was the dominant color in his art, the community often thinks of Justin when they see butterflies and turquoise. 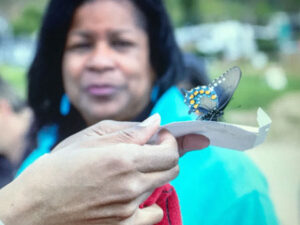 After Langston Hughes
By Justin Carr

The Instructor said,
“Go home and write a page tonight.
And let that page come out of you
Then, it will be true.”
I am an only child.
Not one of three,
Just me.
I go to a school where I feel like a fly in a bowl of milk. Alone.
Walking down halls where I am one of three…
or at least one of the few with dark skin like me.
The kinks in my hair and the dark skin I wear connects me to the trailblazers
Who struggled to clear paths in order to make my journey easier.
As I walk through the white halls with the white walls,
I see the footsteps of Martin, Malcolm, and Coretta before me.
Their pain and suffering endured just so I can be me. Free.
In my classroom,
I don’t sit in the back waiting to be called on
Because the sea of seats are all available to me.
It’s hard for me to Imagine
Being stationed in the back just like my mother and father were,
Where they couldn’t even see,
That they were lacking opportunity.
I turn on the TV to see faces with brown tones
Sing through microphones,
Not of yesterday’s sorrows,
As the wounds have healed leaving scars of remembrance.
Then I look back at me and what do I see? Not a rapper or a ball player,
But a boy with dreams,
Goals,
Promise.
Opportunity.
Written By Justin Carr for English III homework © 2013

“One goal that I am certain I want to achieve is to be able to give back and share my talents with those less fortunate than me. I see many kids in my neighborhood that lack an outlet to be successful or a place where they can seek the help that they can’t get in school or at home. I have lived a very fulfilling life so far, and I thank my family and friends for consistently supporting me throughout my journey. Though my life experiences are different in many ways from other people my age, I feel that all kids and teens should be able to grow up in a supportive and healthy environment. I have often thought about the idea of creating an after-school program for neighborhoods where kids are not exposed to the arts. Artistic education is becoming harder to find, especially in public institutions, even though I feel it is very important for a child’s development. I would create this free program that would provide a place for kids to go who would otherwise be on the streets. Through classes, seminars, and instruction, the students attending the program would be immersed in visual and performing arts, allowing them to have another outlet to express themselves. I would also want there to be a space where students can work and seek help on their daily academics. There is an abandoned historical theatre in my neighborhood. I found the floor plan online, and I know how I would make the interior renovations to make it a perfect fit for my programs.”

Justin Carr Wants World Peace and We Will Make it Happen!